Whether you are a photography buff, love taking photos for your Instagram account, have a polaroid camera you are obsessed with, or are looking to buy a new camera and not sure if you should go with a professional one or a polaroid, it is extremely difficult for many of us to imagine life without being able to capture whatever moment we want on camera, whenever we choose, and with just one swipe on our phones for the most part. So, just to remind you that this wasn’t always the case we have some fascinating facts we want to share with you about the first ever camera.
The first ever photographic camera was based on the camera obscura (Latin for dark room). These were more to study optics than to take pictures, demonstrating how light can be used to project an image onto a flat surface, by the optical phenomenon that happens when an image is reversed and inverted by being projected through a small hole in a screen. The earliest written record of this is attributed to 4th century Han Chinese philosopher, Mozi (around 470 BCE-391 BCE), with many writings by others since then.
In the early 11th century, Arab physicist Ibn al-Haytham (Alhazen), provided the first competent geometrical and quantitative descriptions of the phenomenon, writing about experiments with light through a small opening in a dark room, leading him to be accredited with laying the foundations for the invention of photography in the 19th century.
In fact, the first portable camera was designed by Johann Zahn in 1685, who turned out to be way ahead of his time! The earliest surviving photograph was made by Joseph Nicéphore Niépce around 1825, using a sliding wooden box camera made by Charles and Vincent Chevalier. Niépce had been experimenting with way to capture still images of a camera obscura since 1816. The shot is of the view from his window, which took 8 hours to expose.
Over the coming years this was developed by many others interested in what became known as photography, especially English scientist, Henry Fox Talbot and Niépce’s partner Louis Daguerre, during the 1830s, and Alexander Wolcott is thought to have invented the first camera that made photographs that did not fade quickly in 1840, making a breakthrough in the field. 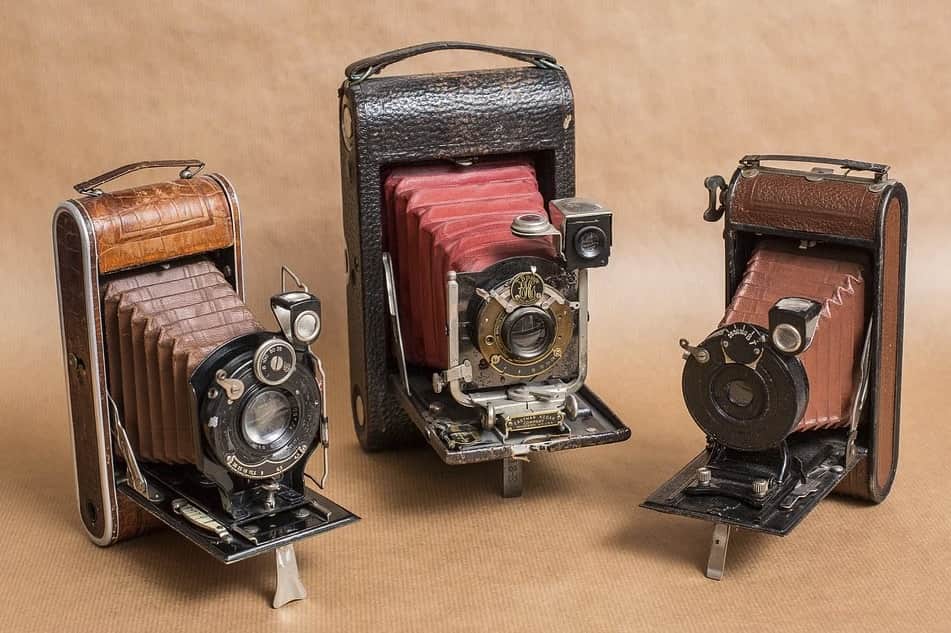 The first cameras were so big it often took a team to operate them, and many of them couldn’t save the images it took, meaning the photographer had to manually trace the images after snapping them, and everything was of course in black and white until the 1940s when colored photography became more common.
It is not really possible to credit one person with invention of the camera or even nailing the exact year it was invented, as so many people have each contributed to us being able to snap a photo today so easily, and with so many options available, including underwater cameras or even flying cameras!