No matter what sporting event is, swimming has always remained on top. Live streaming also gains popularity with every passing event where viewers root for their favorite athlete. Between the men and women categories, the statistics clearly show a high inclination toward the increase in the number of women participants. A few names we have now created history are Natalie Coughlin, Simone Manuel, and many more. These athletes achieve multiple milestones, and their accomplishments will be duly remembered throughout the centuries. Many up-and-coming sportspersons find them to be highly inspiring, and their achievements give them hope to achieve everything they dream of. This blog will discuss the top women swimmers that have created history. The names that we are going to mention here date back to 1912. It was the first time that the Olympics introduced the women swimming category. Now, without any further adieu, let’s dive straight in.

Top 5 Women Swimmers In Our History A Glimpse

The first female Olympic champion, Fanny, was a complete powerhouse for swimming. It was 1912 when she won the gold medal by breaking massive records, such as completing the 100m freestyle race in just 1:19.8 minutes. If we talk about the country, she represented it was New Zealand and Australia. They sent a combined team named Australasia. The swim club was unwilling to send her to the Olympics; however, after quite a struggle, they agreed when she agreed to pay all her expenses.

It was 1976 when Enith became the first black woman to set some records; she was representing The Netherlands. She won two bronze medals in 200m and 100m freestyle swimming at the Olympics. With a total of 21 Dutch titles, Enith was able to set multiple short course records. At the games where she won the bronze and landed on the 3rd spot, it was later exposed that the East German team who claimed the first two spots were involved in doping. After this revelation, she considered herself to be the gold medalist.

If we are to discuss the women swimmers and Olympians, it is impossible to skip Natalie Coughlin from the list. She won various medals throughout her career and a total number of 12-time Olympic medalists; it was in 2008 when she won a whopping six awards in a single season. Natalie was also the first woman swimmer to get two gold medals for two Olympics straight. Both the medals were for 100m backstrokes.

If there were an award solely for the number of times someone crushed the competition, Katie would claim it in no time. She has won 15 championship medals and five gold medals from the Olympics. When she made the first world record for the 800-meter freestyle, she was just 15. No matter which tournament she participated in, Katie remained unbeaten. Apart from the pool, she is also working towards STEM awareness. 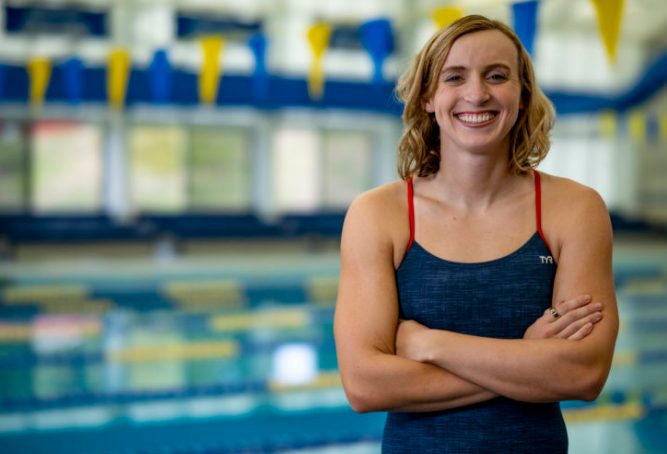 You might have heard of the name in paralympic sports: Jessica Long won more than 23 medals in swimming. At her birth, she was diagnosed with fibular hemimelia. The diagnosis forced her to lose both legs when she was just 18 months old. Throughout her career, Jessica won 3 gold medals. All the medals were for 1*400 meter freestyle, 400-meter freestyle, and 100-meter freestyle. Her determination to achieve the goal has made her break all the records.